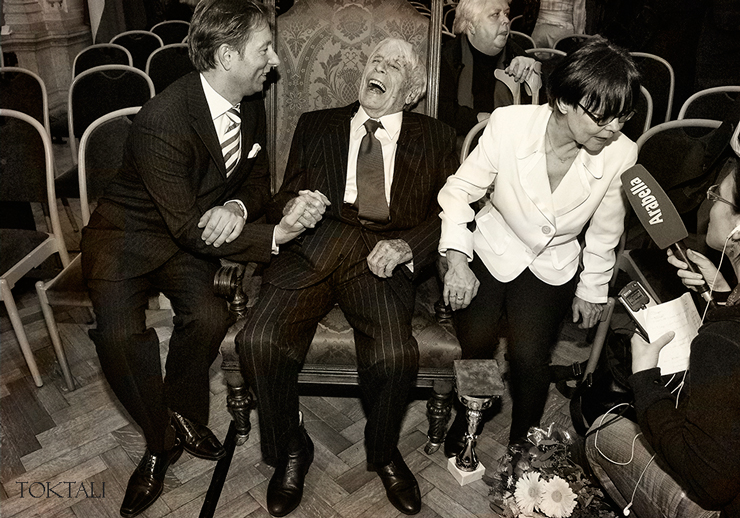 Young female photographer from Media Wien who was responsible for this photo assignment predicted traditional fighting between photographers for place during presentation, and she was right. It was group of 25-30 photo reporters striving to get best view of 106-old Mr. Johannes and his spouse; they crowded in official hall of modest dimensions, now and then breaking the rules and being scolded by managers. Everybody wanted to occupy the place of broadest viewpoint with quickness of lightning, and they constantly changed their dislocation. Once when trying to make shot from more comfortable position, I suddenly got hard blow at my shoulder from behind.

I looked around in bewilderment. I had been hit by one of male photographers, whose obscurity was shadowed for a few seconds by my backside. I felt shocked not so much by pain, but by fact of being assaulted by male. Meanwhile all I could do was to memorize his face and mutter a curse. Still in state of deep astonishment – treated in this way for the first time in my life, I got rude shove from other male. Their manner to secure space for themselves was unnecessary offensive. Young photographer Barbara told that such treatment of competitors was very frequent a case during photo assignments in town-hall, and she suggested such behavior was explicable by hunt for bread bringing good shot.

From my point of view, the prospect of earning money for successful shot can not justify rudeness and violence toward comrades, especially if these comrades are women. Of course, feminists would cry out that men and women are equal. But in situation of real fight, like this, we are not equal at all! To start with, males are inevitably stronger, higher, and they are more aggressive. I scrutinized faces of reporters around me with bitterness and toothache in my heart, they were tall, muscular, invulnerable creatures – them I would admire so much before, who needed these muscles to box the women for illusive chance to get better position under the sun. One must mention the fact that after a while the agitated crowd of reporters vanished, leaving old man behind in company of only closest relatives. The battle field was empty. Mr. Johannes was still sitting in his red chair, and I wondered what he was thinking about.