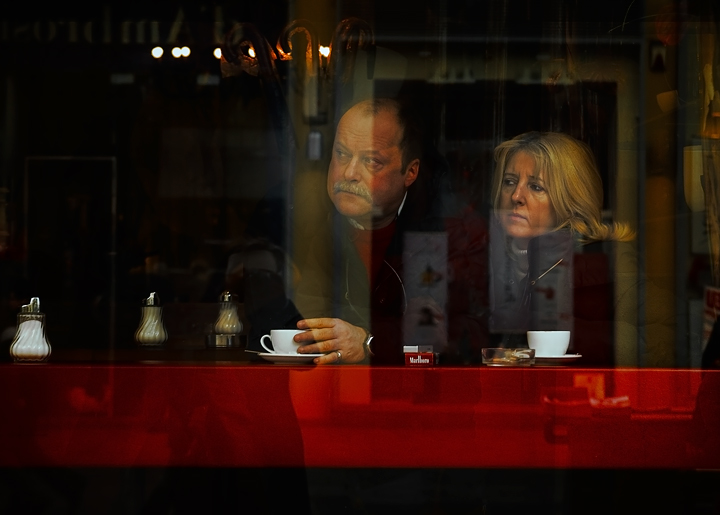 Thinking about the past, I see that nude modeling ads used to bring rich post, and usually after some selection you stay with nothing. All corresponding photographers turn out to be only next seekers of strawberry, dozens of them appear and disappear in life of models as foam. The saddest thing is they look not only for strawberry- satisfaction of their own libido- but also eager to get it free of charge. It never occurs to them that all gains they can get by lying are illusive. With one of my insistent correspondents I decided to meet, because he demonstrated some signs of literacy. General literacy gives more hope for mutual understanding. It was rainy day, and we had met in Ritter cafe, at Mariahilfer strasse. Franz was solid man with lively small brown eyes around 50 years old. He showed me big collection of half-nude women in different appealing poses, best photos he made during last years. I think there is no male photographer in the world who would never try to do Akt. Some of their photos are original, two-three are good, and majority is not more than manifestation of their own libido.
Perhaps real professionalism includes not only good technique, but first of all the ability to rise over your personal masculine aspirations and see woman as aesthetic object.
I sensed only that something dark was standing behind Franz photos. Something always stands behind actions we repeat again for years.
Franz told that all these girls were prostitutes who ordered him internet sedcards.
Good photos could bring them more clients and more visits to hotels. Such photos must not be of artistic value.
What is about artistic taste of men who order whores in hotels?
I tried to guess where main nerve of Franz photo activity was.
Men often feel sort of sympathy for me and do not realize they confide not in potential vaginal episode, but to their occasional psychiatrist.
Franz constantly called and week later after some hesitations invited me to restaurant. And I already had the clue.
Knowing what such type of gentlemen normally expect from women, I decided reduce burden of his not justified expectations to price of salad, which I ordered.
Franz talked about his life success and was extremely talkative. It was real fountain of eloquence. He saw himself being brilliant, smart and superb!
Very soon I got tired and declared I wanted to go home.
He accompanied me, and I didnt know how to get rid of him without hurting his feelings. I already solved the puzzle and felt tremendously bored.
He followed me till the door of my new residence, and there in half darkness of doorway
he admitted being aroused. I didnt let him in, and then he opened his trousers and showed his organ, that was very well erected and with two white birthmarks at the both sides.
He confessed that making photos of prostitutes who paid him for portfolios, he masturbated often, practically every day.
I already knew that.
Men who always expect to get favors from women free from charge or even gain something at expense of her being sexually exploited by other males,
start and end with masturbation like only available form of their sexual life