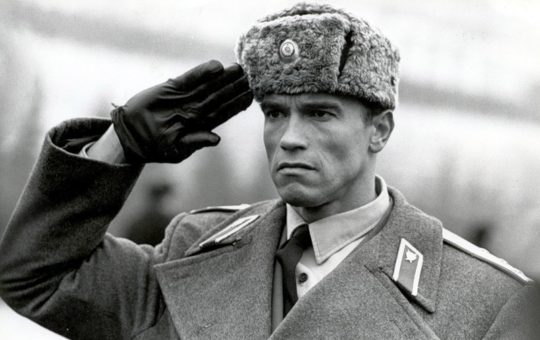 RIA Novosti – Hollywood has long raised Russians’ hackles over what many see as crude national stereotypes propagated on the screen, including the drunken cosmonaut in the 1998 blockbuster “Armageddon,” which sparked outrage in the Russian parliament.
Cyrillic gibberish, anachronisms and Russian phrases that appear to have swished back and forth between languages a dozen times in Google Translate: all of these are par for the course in portrayals of Russia on American screens big and small.
Oddities include a scene from the 1986 Arnold Schwarzenegger film “Red Heat,” in which a Soviet police officer for some reason is typing a report in Russian but using the Latin alphabet, as well as a screenshot from the 1963 James Bond movie “From Russia With Love” that features glass doors in a Russian embassy stenciled with non-Russian words to indicate “push” and “pull.”
Hollywood producers occasionally invest money to ensure the accuracy of such details – investment that is typically hyped in the pre-release promotional campaign. Mostly, though, Hollywood films have relied on “absurd” stereotypes and “rough approximations of what might imaginably be true. Over the past century, most Hollywood directors who contemplated making films involving Russia knew next to nothing about the country.