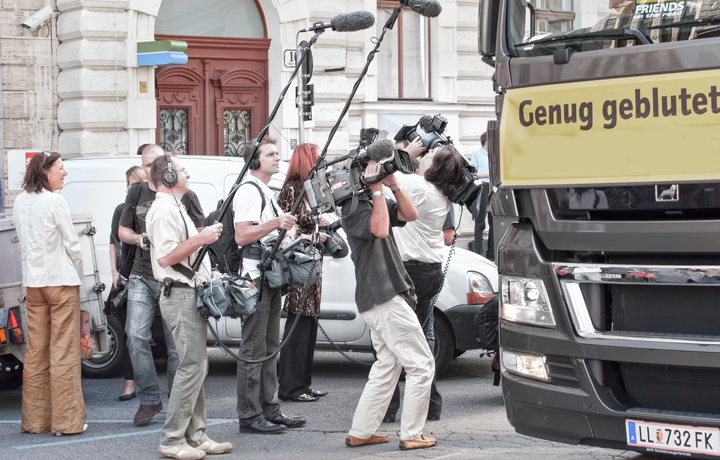 Journalists belong to special caste. Whoever starts on this thorny way, rarely change profession. The reason is simple: they are forced to proceed. Staff manager of any company apart from PR and news agencies, looking through professional history of applicant, may be alarmed by facts of his intimate affairs with mass media. Such a reputation considered to be seriously compromised. Every company and institution has something to conceal from public view. Many organizations dread of journalists, who demonstrate: first- certain level of literacy, and second- ability to prostitute this literacy, if something goes wrong. And in company sooner or later something always goes wrong. Therefore journalist, who wants to start new profession, must break wall of distrust toward person capable of collecting information and selling it. For mass media professionals there is no way back, as there is no way back for agents employed by a state to obtain secret information or individuals with serious criminal record. The journalism is as ancient as bodily prostitution, and has much in common with it.
One of main common features here is audacity. Prostitutes and reporters demonstrate boldness and persistence. They develop thick skins making themselves insensitive to reject.
Today I met for a talk with one of Graz photographers. Ben came to capital to purchase piece of equipment. We were sitting in Westbahnstrasse café, sharing news. Ben is engaged in counseling work, and makes shooting only on special occasions, as many middle-rate photographers do. He asked me how does it go with my job search in Vienna. I told everything is dead as in the tank, no glimpse of light from outside. Ben stayed thoughtful for a while and then said:
– You overestimate possibilities of Austrian press. Austrian newspapers are completely conventional, they never write a truth. Always keep in mind passion of national Austrian character for beauties of lie and euphemisms. Journalists are corrupted like the whores. They would write all whatever boss or authority expects of them. Do you read Austrian newspapers, by the way? I have no nerve to look through this pretentious and brainless staff. If I were you, I would try to write for German or world newspapers. You told you were shocked by sarcastic tone of “Presse” chief editor who sent you rejection letter, but even if he meant you would never ever have chance to write for him, consider this: may be you are too sincere and original for such kind of conformist paper?
We have talked a little bit more, and then went to United Camera shop to gaze at lenses exposed in the window.
– Employment situation is rather difficult in Europe now, – continued Ben, – My girlfriend is unemployed, and she told that some companies in Vienna have 200 applications for every vacant office position.
I thought about, how many anxious job seekers would get reject and consider it as personal failure, when reject means only that they are not sufficiently uniformed yet and don’t have enough mimicry to conceal that, and only those most capable for conformism and imitation, would be accepted in magic realm of some second-rate import-export of pork company, and being accepted in this realm, they would become true members of molded team in molded society.
When we parted with Ben, I walked along Vienna streets and looked at faces of people which were full of joyful holiday expectations.
Everybody dreams to find formula of common life rules to reduce pains of feeling yourself outcast. To be alive inevitably means to be member of society, where children from very childhood are taught not to trust their own judgments. Children are taught to comply to authorities and respect somebody’s superior opinions. Eventually system has army of workers whose minds present set of fix patterns, programmed not make one step further than they are allowed. These robots are taught they are nation of freedom and democracy. Often they feel themselves imprisoned, but they don’t know why and who is guilty for this imprisonment, because their real enemy is never named.
Once during one of my unemployment course, pretty doll-like trainer who wished to look younger of her post-menopause age, told that she understood quite well why being journalist I left Russia for Austria.
She fixed small irregularity in her outfit of rather heroic decollete, and added:
– There is no real freedom of speech in Russia.
Perhaps she assumed I obtained more freedom in Austria, sitting on tiny welfare and being dead for media as journalist.
Everybody gives to words “love” and “freedom” their own meaning.