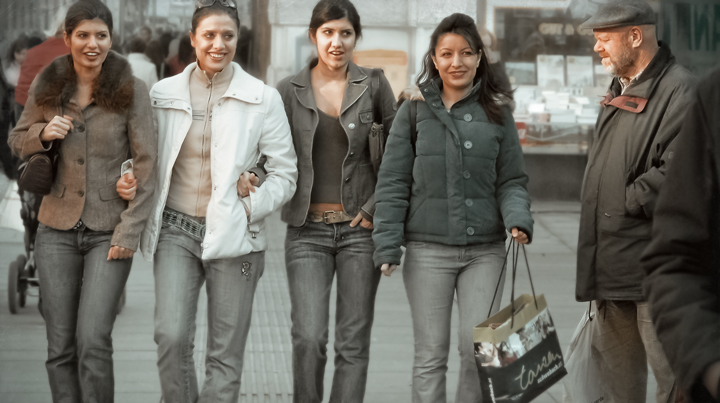 As I am quick reader and frequent visitor of Thalia bookshop, I often experience choice problems in front of shelve with non-fiction books in English there. It seems, most prominent motivation and inspirational American authors market their creativity so well, that my buyer capabilities stand in direct proportion to sacred knowledge I can attain from these gurus. Often book bought here, its price extracted from provision sustenance, had diminished or repetitive content and extra quantity of illustrations or empty sheets. Whatever contemporary spiritual teachers write in their books inspiring us to free ourselves of materialistic attitudes and vanity, book industry, representing them and many other authors, demonstrates opposite, non-spiritual and profit-orientated approach.
I felt increasing interest toward Austrian authors and book events that took part in Austria.

Yesterday I was just roaming through two books – novel of Austrian Nobel Prize winner Elfriede Jelinek, where it was hard to follow main idea due to odd amount of metaphoric curls and  through non-fiction book of John Leake about Vienna serial killer, when I suddenly got call from my old Graz acquaintance, who in his shopping ramble occurred to be not far away and asked me to meet him for a talk.
In spite of time deficit, I urge myself to be sympathetic toward person, who probably felt himself lonely in big city.
We met in nearby restaurant. The face of Michi seemed pale in dim room. The flabby bags under Michi’s eyes and loose skin at the place where his Adam’s apple once was, vague stare and stained shabby jacket – all in his appearance was touched by pitiless work of time. Once in shop business, Michi retired early, and became one of many those who stood daily in front of dilemma what to do with themselves in spare time.
We recollected time of visiting so many art exhibitions in Graz together, where we both hunted for free knowledge and snacks: me – being penniless, Michi – being tight. Now Michi started his fun Vienna tour with traditional big glass of beer.
It was “Bombay” at the corner of Neubaugasse, and the curry I ordered was overcooked heap of old beef scraps in excruciatingly hot sauce, though called Madras curry lamb. The quantity of chili cook added to the dish, perhaps with idea to make mess indistinguishable, and also sight of Michi devouring his portion greedily, made me feeling acid and I started to talk about crime.
I wanted to hear gossips about Natascha Kampusch- Josef Frtzl -Jack Unterweger cases, and Michi expressed opinion that such crime as keeping victim in the cellar for years, presented certainly national attribute, when customary detachment of people and their non-interference in affairs of neighbors, helped offenders to keep secret for years. In my turn I told, that main national specific of such crimes was double-faced personality of offenders who wished to stay nice in the eyes of relatives and public, whatever they felt and whatever they did in the cellars.

Many people just have such cellar in their mind, unreachable for others, cellar, where most pervert and most thrilling things can take place. Austrian wrongdoers craved for approval and led double life energized by their own split self-image, the more they tried to look presentable behind borders of their psychopathic passions, the more destructive and fierce their shadow personality was. If one would dare to be less nice in public, and try to reveal his complete self in front of others, seduction to violate helpless victims and have them – alive or dead – in complete power secretly – would be equivalently diminished.

Michi told that he distantly knew Jack Unterweger personally, as many knew this journalist by his public discussions and reports, who used to stroll through Vienna’s cafes, very smart  in his white suit. Business women were especially fond of Jack and sponsored him. Perhaps females sensed his unusual aura, the aura of men who strangled 11 prostitutes with their own bras.
The meal was over, and face of Michi became more clouded. The second glass of beer was empty, and together with its steams main pleasure of Michi’s life evaporated.
– One can never know what women really want, – told Michi, wiping bald spot of the head with napkin.
Then he related me events of his recent disappointment.
Michi – lonely retired man in his sixties, deprived of friendships and spending his life in front of TV, strived for love.

He advertised in local newspapers and on Internet. He created profiles in dating agencies. He became favored by Russian spammers who sent him numerous love letters with photos of beautiful girls, as result of his visits to erotic websites.
He wrote to many, but really fell only for 26-years old stunningly pretty Natalia from Siberian town, who conquered his heart by saying she fell in love with Michi at first sight. He started to believe in unbelievable, and eventually invited her to visit him in Graz, sending visa fees and air-tickets to Russia, which for him was act of supreme generosity.
His case occurred to be lucky one, because girl really appeared in the airport as she promised, almost as stunning as her photo. Michi felt himself young and happy and was full of breath taking hopes. But apart from being very nice, woman refused to stay with Michi in one bed unless he gave promise to buy her new fur overcoat.
A few days passed, and Michi, who was convinced bachelor, found hard time accommodating to whims of other person, who in contrary to his insatiable thirst had very little interest to intimacy, unless she got rewards for her efforts. The rate of costs for these rewards Michi with his traditional painstaking practicality could not stand.
Eventually girl departed for home, leaving Michi in misery, even more lonely than before. He was thinking constantly about warmth of her young silky body which he occasionally possessed in darkness of his filthy bedroom. And he felt anger. No, he was never capable of hitting woman , but he definitely wanted her to experience pain he knew himself. They both were frustrated. Woman left feeling herself cheated, as if gap she made in his savings was far behind her expectations.
–    She told I am too stingy,- confessed Michi self-humouredly.
But this humor sounded bitter. He paid for illusion somebody would come and bring meaning to his life.
We parted with Michi, and I was looking after him till green ribbon and feathers of his hat disappeared in darkness.
Still thinking about specifics of national crime, I was going home, and
there, quite opposite of my lodgings, I spotted figure of the woman in short skirt, standing by the road.
She just finished initial quick talk about price with driver and was ready to land her hips and high-heeled legs in the car. The car’s lights were switched off,
and I could not see drivers face. But then girl asked for cigarette, and in flicker of light I saw profiles of prostitute and her client. Man had handsome face and looked not less attractive as Jack Killer himself.