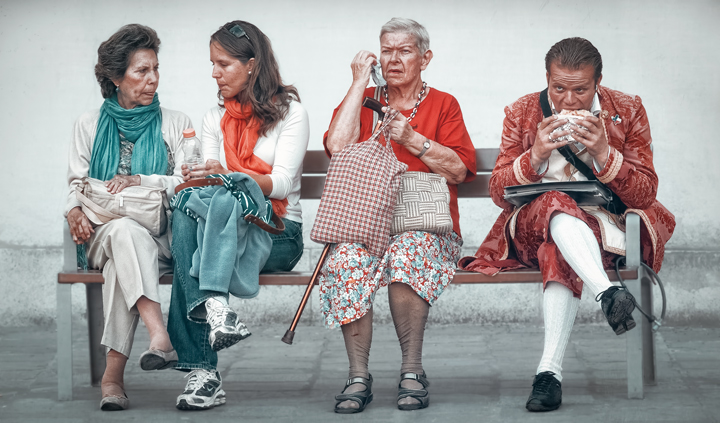 Whenever pink morning light transits to yellow of midday, and wind blowing from Schmelz stops bringing meditative tunes of kukus bird, I start my everyday journey. Mirror in my small flat is the gateway. I step behind it and as invisible clot of energy roll outside. Together with gust of wind I move along streets of Vienna and touch cheeks of passers-by with cool breathing of fog. I witness street life, its secrets and its drama.
Sometimes I occur to be that small beggar girl sitting at the corner of main street. She has cheap plastic doll in her pocket she wants very much to play with. For a while, I was also that woman in furs gazing at jewelry in window of fashionable shop. She seemed seized with anticipation to purchase precious thing.
I could be that invalid who crawled on his knees along Mariahilfer strasse and roared -Bitter!- with low hoarse voice. He had only one thought that after reaching the corner of Neubaugasse, he would make a break.
I participate in life of everybody at whom I look.
Observing street life, I contemplate that many live creatures have collective intellect. Behavior of bees and ants, for example, reveals uncommunicative cooperation. Every tiny ant is inseparable fraction of whole commune tired to it by invisible bonds.
Every unit of this world has its own play that perfectly fits in melodies of universal orchestra.
Do we feel ourselves inseparable with all humankind? Do we feel ourselves in literal sense participating in life of every person we meet in the street? Perhaps, not.
We see ourselves as alienated competitors in the life race. Reality is contest of winners and losers, and participate in it means to assert our superiority or inferiority.
Feeling of isolation and loneliness is inevitable consequence of this race. It is common ingredient of any unhappiness.
I would often observe one poor homeless drunkard at the benches of Westbahnhof,
tortured by cold and thirst.
I could enter his dumb world, where he swam alone in dark waters of mental coma. Anybody around would feel himself superior to him.
But I knew that his essential human core, that is common in all humans and not definable by social labels, in spite of ideas of decency and prosperity, this human core stayed in him pure and untouched. He was potentially capable of great things he never suspected about.
Humiliated and downtrodden outcasts do not know how powerful and superior they are!
There precious human depths stay forever unrevealed.
For me as for photographer all human being have basic inner equality.
What I value in street life and its spontaneous depiction is sincerity and innocence.
And those who do not care much about their social mask often have these qualities.